Corey and Carl in Spain!

Day one. It's 11:35am and I'm trying to find my way around the Madrid airport in search of my checked-in luggage. Why don't I just ask someone? Perfect. Wait, how do you say "checked-in luggage" in Spanish? Where do I go once I retrieve it?? Where's my apartment? Oh no...

This was just the beginning to the start of my five-week experience here in Madrid, Spain. However, it quickly became, and still is, one of the best and most extraordinary experiences of my entire life. Let me, and my dragon Carl, share some of our stories. 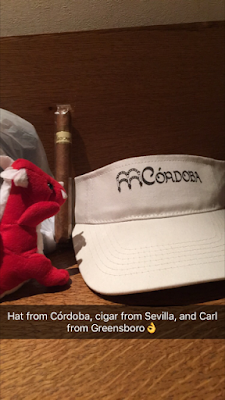 I've lived in a semi-suburban city in Southern California and Greensboro, and I've lived in the middle of nowhere in my hometown Four Oaks, NC. What I haven't done is live in the middle of downtown of a giant city. Our directors say it is the US equivalent of living in downtown Manhattan. Within the first few days, I did so many things I thought I'd never do. I got a metro card (which I had to make an appointment for online, in Spanish!) and mastered the metro station. I tried sheep-intestine which surprisingly wasn't all that bad. Most importantly, I roomed with eight other students (and a pretty cool guy from Denmark), and started making some of the best memories of my life. Our schedule for the five weeks was pretty straight forward: classes from 2pm-5pm almost everyday with a few museum trips in between. I am currently taking SPA 332 and SPA 313, Spain history and Spanish conversation, respectively, which both teach us the value and uniqueness of the language and culture (especially during our cultural visits). The first weekend we went to Segovia as a group (30 students plus 3 faculty). It was sort of like a trail, passing by multiple historic sights and structures. My favorite there was the famous aqueduct as well as the cathedral. They were both so beautiful and amazing pieces of history in Spain. 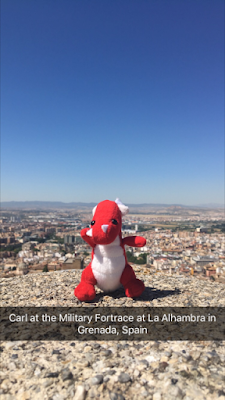 During the second week I was also able to go with a few other students to tour the Real Madrid soccer stadium which was absolutely amazing. Not only that, but Real Madrid and Atletico Madrid, two major soccer teams, were playing in a championship game (in Milan, Italy) in which the entire city stopped for night to watch the game in just about every bar in Madrid. It was simply amazing to see and be a part of the intensity and the love and admiration people have for their hometown here in Madrid.


I definitely have noticed a variety of things that are different here in Madrid (and Spain in general). For one, drinking here is as casual as anything else. You want a beer with your jamón y huevos in the morning? You got it (by the way, jamón y pan, or ham and bread, is HUGE here). Nightlife is more like all-day-life as the casual hangouts and fun seem to never end. It is a busy, busy city and can be overwhelming at times, but yet everyone seems to really enjoy themselves, as so have I!


To continue, the second weekend we went to Toledo, which had breathtaking scenery and a plethora of historic stories and meaning. Here, we toured many different and ancient "neighborhoods" that belonged to different religious groups such as Muslims, Jews and Christians. I learned so much about how one city can change the historic views of the entire country of Spain. Simply put, I was lost for words.
The third weekend we took a long, four-day trip to Córdoba, Sevilla and Granada in southern Spain. My favorite of the three was most definitely Sevilla, in which I encountered a wide variety of new experiences. I got to see a variety of Spanish dancing and singing such as Flamenco dancing. I also got to try some interesting food such as croquetas (some type of seafood or chicken filled hush-puppy snack?) and los caracoles, aka snails which were also quite nice! To add, I also got to see the location of where Naboo from Star Wars was filmed, which was in the Plaza de España in Sevilla. I, as well as Carl, also enjoyed the historic site La Alhambra in Granada before our bus ride back to Madrid. The scenery was astonishing, and the history behind it, while too long to tell, was very interesting to me!

So, here we are now, midway into week four of five. This weekend we have a free weekend in which a small group of us and I are traveling to Tangier, Morocco in Africa for the weekend (new continent? Yessir!)! After that, the last week will be filled with final exams and projects, last-minute shopping, and bittersweet goodbyes. I do miss my family and friends back home, but believe me when I tell you that I have created friends and experiences here over the past few weeks that I hope will stay with me for a lifetime and am not going to want to leave this beautiful city and country. I'll be back to the states soon, but until then , ¡hasta luego