The world is a vast, expansive place filled with different cultures, colors, rules, religions, sexualities, norms, et cetera, et cetera, and the list goes on. Some of us are comfortable with sticking to what we know, but for those of us who have a thirst to explore and understand the differences this world has to offer here is some advice for you. The post I am writing today is for the University of North Carolina at Greensboro’s International Honors College and for any student who is considering studying in another country.

Forget All Expectations
When traveling to a new country we often make fictional expectations based off what we see on television, read from books, and see in pictures. However, the only expectation you should have is to have a good time. Don’t expect a prince charming to appear on a moped, show you around the country of your dreams, and have you become an international popstar. Lizzie McGuire tried that and we all know that romance was a bust. The problem with setting the bar high is that there is a chance that you will be let down.


Sticking Out like A Sore Thumb
As an American studying in England I did not expect to feel so estranged some days. Quickly, I discovered that my differences would draw a lot of attention from the locals. I distinctly remember giving a presentation in front of my coursemates the second day of classes. The instant I opened my mouth everyone heard my accent, their eyes averted directly towards me and the quiet chatter ceased to exist. As a person who hardly gets nervous I couldn’t stop myself from stuttering. There are negatives and positives to being a foreigner. Many people will be intrigued by your differences and will be open to getting to know you and forming a friendship. However, there are people who will be prejudice towards your differences as well. As an American I've received a lot of positive reactions. For those who have biased opinions towards you, you will have to charm them with your good looks and wit.

Socializing Steroids
My biggest fear before traveling to England was that I wouldn't make friends. I consider myself a fairly sociable person who is comfortable with making small talk among strangers. However, I would not say that I am entirely extroverted.  Socializing can be exhausting and sometimes being the life of the party is often draining. No matter if you are the social butterfly or the shy caterpillar socializing with locals, internationals,  flatmates, anyone, and everyone is so important to the experience. A new person is another story, connection, and friendship. Introduce yourself to the Canadian sitting in the back or the gang of chatty Geographers in your course. Trust me, you'll be glad you did! You might even get invited to go a British roast or a trip to Europe like I did.


Sing, Sang, Sung: Join a Group
In our everyday lives we often get bogged down by responsibilities. Studying abroad allows you to take a step back from all the typical chaos of your friends, family, and work. I took this free time to do something that I was passionate about, singing. I joined Plymouth University's student choir in order to get back in touch with my love of music that I packed away long ago in high school.  By doing something I love I was able to surround myself with others who have a similar interest as me. I even received a solo in our Spring concert. I sang "You'll Be in My Heart" from Tarzan (Video coming soon).

There's No Place Like Home
Studying abroad in England has been an experience of a lifetime. Plymouth, a once unfamiliar playground, has become a home to me. However, the biggest dilemma I face is missing my friends and family from time to time. It's hard leaving a place of comfort and familiarity. But your friends and family will be waiting for you while new ones are awaiting to be made abroad. I won't lie to you it can be quite difficult and time differences are annoying. You will wake up at 4 AM to talk to your best friend about her life problems or stay up on the phone way past your bedtime. As you grow during this experience, their lives and yours will continue to move forward but will always remain intertwined.

Allison Sermarini
Plymouth University
Plymouth, UK
Posted by Unknown at 11:38 AM No comments:


Dzién dobry! I just hit the two-month mark in my semester abroad in Wrocław, Poland.

Wroclaw, Breslau, Vratislav…it has multiple names and a rich history. It’s a beautiful, formerly German city, now in a country that I knew very little about before coming here. 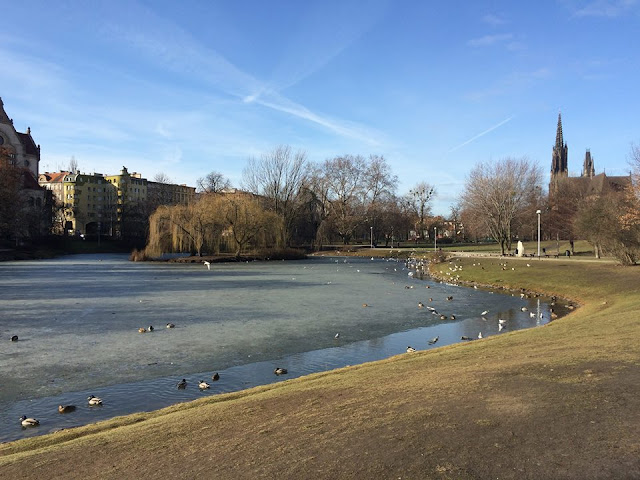 When I first announced that I’d be spending my semester abroad in Poland, the only reactions I got were confused looks and people asking why I would want to go here. Well, the initial reason I chose Poland was because the concentration of my studies (History and International Relations) is primarily on Eastern Europe; I also thought that since I knew almost nothing about Poland, it would be really interesting. But before I arrived, I had a hard time finding anyone who had come here to study before—most of the people I knew who had studied abroad had gone to England or Wales, so I really had no idea what to expect. That mystery both appealed to me and scared me.

Before coming to Poland, I’d already experienced culture shock once before in my life—I spent a month in Russia this past summer—from new settings and language barriers. Very few people in Poland speak English, but apart from the cranky doormen in our dormitories, most people are happy to help.

The transition period here was a little tough because some of the university employees, and much of the administration in our dorms, don’t speak any English. We all had to figure out how public transportation worked, to move into the dorms and sign paperwork, and to find the office to pick up the extremely essential “legitymacja” (a student ID that allows us to enter the dorms—just like a Spartan Card).

Luckily, the University of Wrocław offers a free introductory course for the Polish language, two weeks before the semester starts—and it was a lifesaver. The best decision I made in the beginning was to take this class. At first I felt scared and lost in a city where I knew no one, but during this class I met people from all over the world, many of whom have become the close friends that I spend much of my time with and will hopefully keep in touch with for years to come. At the beginning, everyone is new, and everyone sticks together to figure things out, especially in a country like Poland where nothing ever goes quite as planned. I use the Polish that I’ve learned on a daily basis and hope to improve throughout my stay; the language is one of the most important things I’d like to take away from this experience.

Another great thing about Wrocław is that the location is ideal—I’m just three hours away from major cities like Prague, Berlin and Krakow.

Wrocław is definitely a college town, meaning that apart from clubbing and going to bars, there’s not too much else to do on the weekends. Transportation here, and in most of Eastern Europe, is so easy and cheap that it’s no problem to take a bus or train just a few hours away on the weekend, so when the mood strikes and we feel like seeing historical sights or just a new setting, we can just get tickets to wherever we want to go. Poland, and the rest of Central/Eastern Europe, is so full of history, especially the legacy of the 20th century.

Coming to Poland to study was one of the best decisions I’ve ever made; I was really nervous before I arrived, but since I got here I haven’t questioned my decision for a second. Poland is a beautiful country and I’m glad that I gave it a chance despite being worried about the lack of information I had beforehand.  The culture and language is so different here, so it was a big hurdle to overcome. It can be confusing and just plain scary at times. But despite these problems that I wouldn’t have faced if I had picked somewhere that English was widely spoken, this was a great way to fully immerse myself and get the most out of my study abroad experience. That’s why I would recommend to anyone who’s up for a challenge to pick somewhere like Poland, where you know you might be getting in over your head—I can promise that the language skills and independence that you pick up along the way are well worth it. And the people you meet along the way will help make it the biggest adventure of your life. 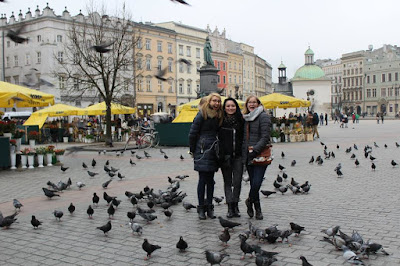 Claire Daniels
University of Wroclaw
Wroclaw, Poland
Posted by Unknown at 10:51 AM No comments: