Zack and Elva in Copenhagen!


A Letter From Over The Seas
Hello, UNC Greensboro! This is Zack Weaver, English Major and student far afield in Copenhagen, Denmark. The seasons here are beginning to turn, changing the weather from warm to cold before my very eyes. (No snow yet, though.) I am accompanied in my travels by my Lloyd Honors dragon Elva, and a better companion one could never hope to have. She’s been most accommodating to being stuffed into breast pockets and hauled around for sightseeing and photo ops.

I suspect she enjoys the attention though. It’s not every day that a dragon can sightsee without unwanted hysterical attention!

Elva and I have been getting along wonderfully. She’s been coming along with me on all my classes’ cultural activities. We’ve been getting a lot of mileage on these travels. We’ve been to Fredericksborg, the Peder Skram (a retired Danish frigate), Viking museums around Denmark, Viking graveyards and runic stones in Sweden, and even up to London with the professors Hodgkins’ class.  She’s been quite the well-traveled dragon!

We arrived in Copenhagen on July 28th, a month early, owing to a pre-semester Danish course. It was with no small apprehension (not schoolwork nervousness, that came later!) but rather stemming from the simple task of finding my residence and figuring out basics like transit and food.  Researching on the internet is one thing, but on the grounds of a foreign country was another. There’s no really good way to be prepared. Fortunately I adapted fairly quickly, finding food with the help of dormmates and figuring out the transit system with the assistance of University people.

(A side note: we were told about the five stages of coping with being in a foreign nation, and how this would be a gradual process. I actually went through them all on Day One and was fairly comfortable after that, odd logistical issue aside.)

I am living with a roommate; his name is Mingjia, and he hails from China. He is studying Computer Programming at the University of Copenhagen, and will be here for two years. We’ve gotten along wonderfully, and have had some cultural exchanges. 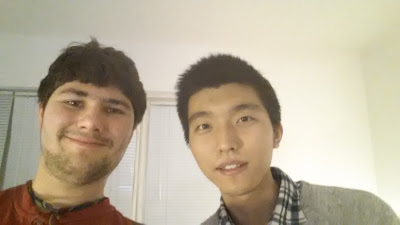