Marissa and Reggie in Wales, Part 2!

We stayed in Cardiff for three nights, carving out a morning/afternoon to visit the Roman sites and museum in Caerleon. As a Classics major I will always take the opportunity to nerd out. The first site that we saw was an amphitheater built in 90 AD. It was such a thrill to stand in the middle of the arena where there was so much history…although that history did include the deaths of many gladiators…but whoo! I did find it entertaining, however, that the sites seemed to be geared toward children. On this particularly cold and rainy day the only people visiting these sites were my two friends, me, and a huge group of rambunctious kids led by their exhausted chaperons. I figure this would be the equivalent of my elementary school field trips to Monticello. I remember being that young and visiting the amazing piece of architecture lived in by our nation’s third president. All I could ever think about was how hungry I was, or how tired. I certainly did not care about the Latin and Ancient Greek texts outlining the library bookshelves…ha. So as I looked at these young people frolicking through the amphitheater with their scavenger hunts I could only laugh. I also had the pleasure of looking at the signs they had made, with cartoon versions of Romans in the amphitheater. I was laughing pretty hard to say the least.

After that we went to the barracks that had been set up in 50 AD so that the Roman Empire could continue to expand their territory, because clearly their empire was not big enough. The amazing part about these barracks is that they are the only ones you can find in the U.K! I walked through the rooms that Roman soldiers would have slept in, and stepped in the kitchen which was conveniently located near the latrines.

Having walked outside for a good 30 minutes, while dragging my two non-Classicists friends along the way, we then went through the Roman Legionary Museum. It was only one floor, and at first I had a hard time believing half of the artifacts presented were real. This was because a) they were so well preserved, b) there was red writing on the inscriptions (paint does not survive), and c) I am a critic. However, when I had the rare chance to speak with the curator he told me that everything being showcased was the real deal. It had all been excavated in sites in Caerleon.

For any conservation nerds this will be interesting…for others it may just be…well nerdy. The archaeologists had used clear acrylic paint on the inscriptions as to not damage the stone, and then painted over with red paint to make it easier to read. The inscription in the bottom of the above picture has no modern paint added to it, but is red only because you can actually see the faint remainder of the original paint (WOAH).


Then there is the mosaic floor, and I have always been curious as to how archaeologists literally pick up and move an ancient floor without it breaking. Like I said before, I am Queen of the Skeptics. It turns out they use animal glue and a thin sheet material in order to keep each individual tile together. Then they scrape the floor up…and roll it up…LIKE A RUG. They finally take it to where they want to house it, roll it back out, and pour hot water on it to take off the glue and sheet. You have to admit: Archaeology and conservation are bad-ass.

Marissa Sarver
Trinity St. David
Wales
Posted by Unknown at 6:09 AM No comments:

Marissa and Reggie in Wales!

This past week my University had reading week so that students could have uninterrupted time to study. So naturally I abandoned all responsibility for course work and instead dedicated my free time to travel. I easily could have traveled farther, but we decided to get to know our host country better. And let me tell you, such a good choice. Samantha, Lauren, Parmigiano Reggiano the dragon (or Reggie for short), and myself traveled around Wales!

For the first night we stayed in Poppit sands, starting off the next day hiking the Pembrokeshire Coast National Park. We were told by experienced hikers that the hike to Newport should only take about 3-5 hours, and of course we trusted this. So the next day we set off with all of our belongings expecting to be in Newport in time for lunch. After some pretty steep climbs along the coastline we had become exhausted. However, our optimistic outlook was still going strong with the beautiful view. 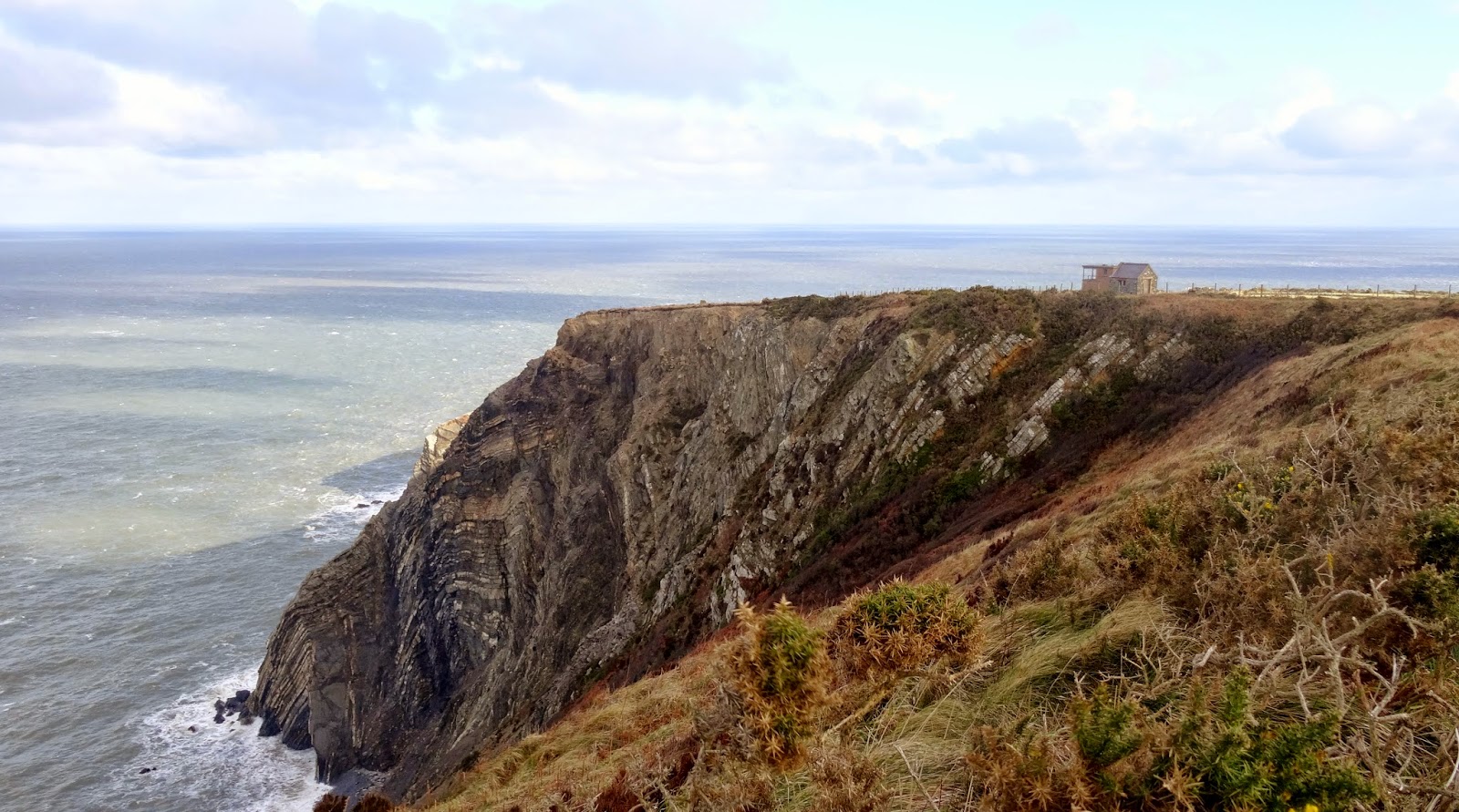 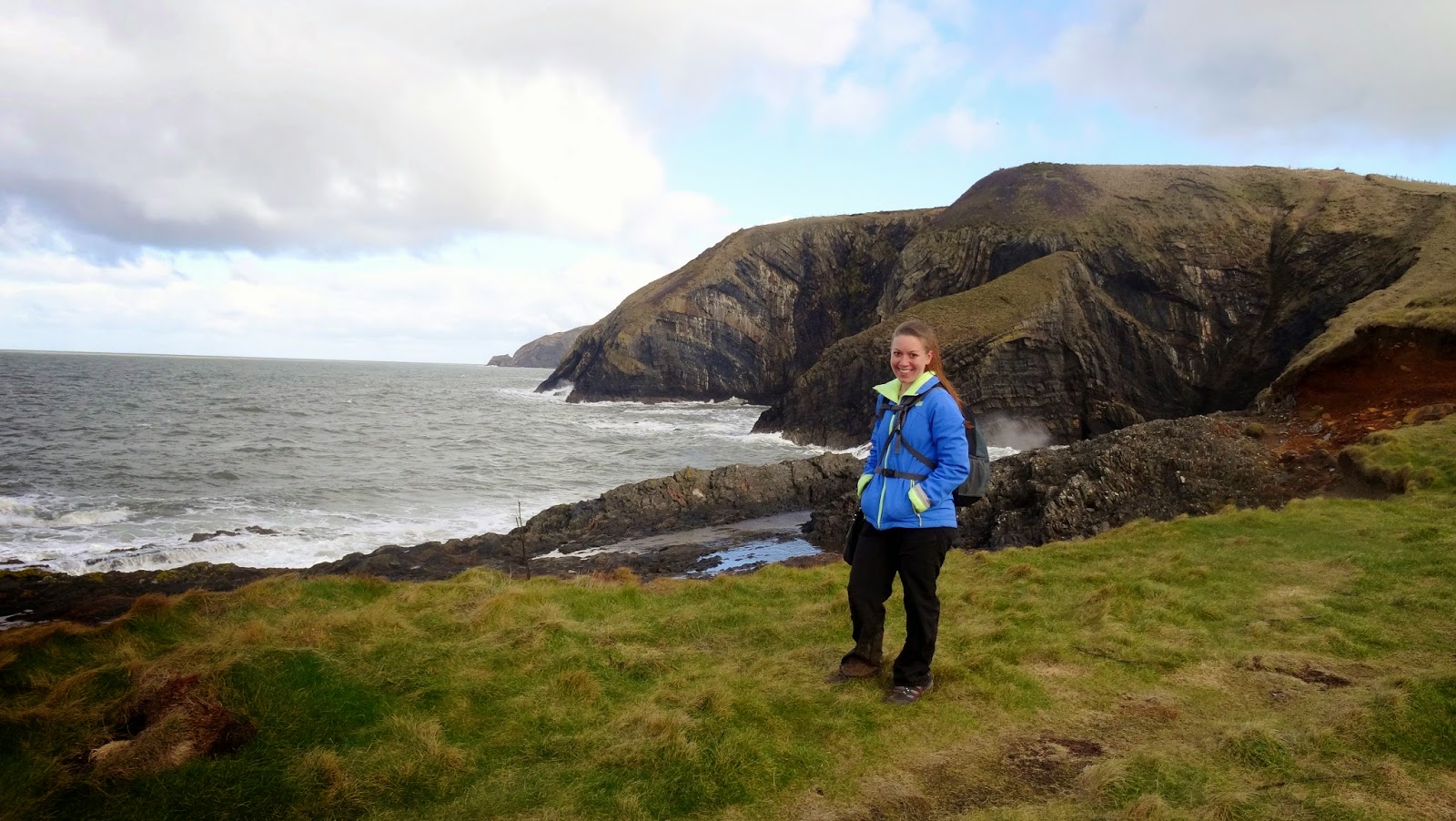 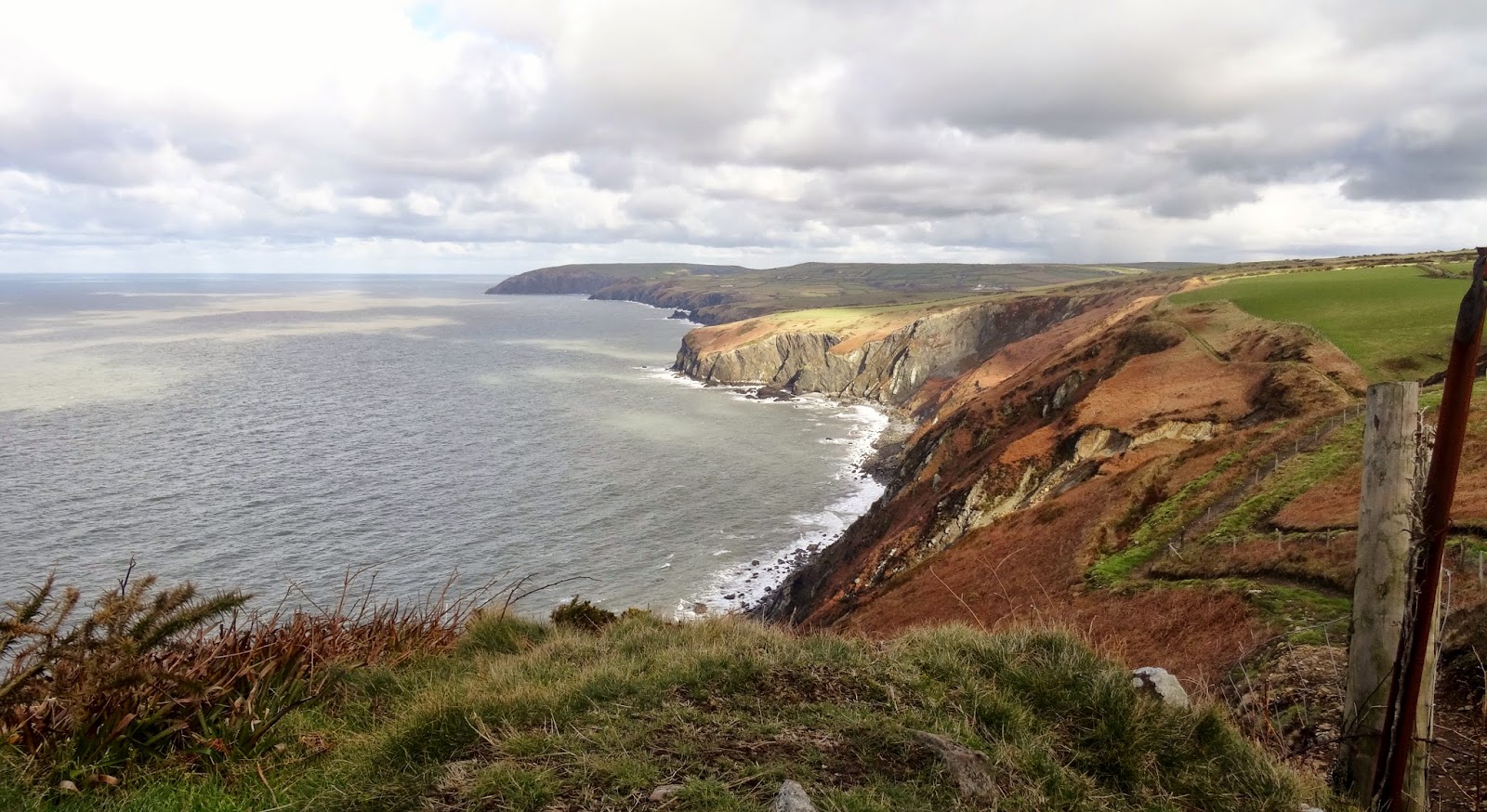 Along the way we reached a farm with some very friendly horses, and also met the older man who owned them. Reggie wanted to eat the horses but I told him they were just for petting. He was reluctant but eventually he did bond with one of them!

We then asked the owner, already assuming we were correct, if Newport was close. He laughed. We became afraid. He then proceeded to tell us that we were barely halfway. Our hearts broke a little, because after 6 miles/3 hours of hiking up and down hills we were exhausted. But we had our destination, and we had our goals! We continued to trek on, and finally came upon a sign that said 8 1/2 miles left…and then another sign telling us that we were now coming upon the most difficult part of the hike. With hardly any food and the fear of losing daylight, all we could do was get there.

The view was still beautiful, but there came a point when all I wanted to see was a town…with other people. Gradually our motivation dwindled, which led to us jumping fences. I do not feel bad for trespassing because 1) we were in the middle of nowhere, 2) what is a nice Welsh gentleman actually going to do?, and 3) the territory over the fence was drastically easier to hike than the stupid up and down hills (where we basically had to crawl on our hands in order to pull ourselves up). Of course Reggie made no complaints the whole time because he was either flying or riding in my backpack. I would be lying if I didn’t say that the little dragon’s peppy mood didn’t bug me about half way through. But I am happy that the little guy had fun…while I was in pain. Finally after 14 miles we came over a hill and saw civilization…praise! Not only was it gorgeous because civilization, but in general Newport is an amazing town. We climbed down from a waterfall (because once again there was a hill and we were done with those) onto the bay. It was the perfect time of day, with the sun setting and the clouds reflected in the water.

But we were not done yet! We had to walk about another mile to the center of town, catch the bus to Haverford West, and then catch a train to Cardiff. With an hour to spare before the train came, we took the bus back into town to get some food. Only thing about this last excursion…the next bus to take us back to the train station would arrive 5 minutes before the last train left. We were a little on edge. Thankfully it did come, and we stepped onto the platform just as the train pulled in. I sat down, breathed the biggest sigh of relief, ate my healthy choice of KitKats and chips, and napped until Cardiff.

It was definitely a long day and certainly painful, but now I can look back and say I hiked a total of 19 miles in one day. It may have been torture in the moment, but it’s one heck of a story.

Marissa Sarver
Trinity St. David
Wales
Posted by Unknown at 10:55 AM No comments: