Leanna and Lloyd in Spain!

I recently spent five weeks in Spain with some awesome UNCG students and faculty members! We lived in host homes in the city of Madrid, but had fun weekend trips planned and led by the faculty members on the trip. While I was in Spain, I visited Segovia, Mérida, Sevilla (Seville, as we Americans call it), Granada, and Toledo. The last weekend that we were in Spain, we were able to go wherever we wanted, so I decided to travel to Morocco, Africa!! My hope for this blog post is that you become very informed about the awesome opportunities of this trip, that you enjoy reading it, and that it influences your decision to study abroad.
First of all, I am an Elementary Education major who is concentrating in Spanish, so this trip was the perfect opportunity to finish getting my necessary credits and satisfying my International Honors. As I mentioned, we lived in Madrid for the duration of the trip with host families around the city. I lived on Calle Arenal, which is one of the main roads in Spain. I saw everything from riots, to parades, to live musicians, and people painted like statues. It is definitely a very lively city that (unfortunately for me) never sleeps. I was not planning on spending these five weeks sleeping with ear plugs in my ears, but it was clearly worth it!
While in Madrid I was able to experience some really interesting cultural things. We visited three museums while in Madrid including: The Museum of Modern Art Reina Sofía, The Prado Art Museum, and El Museo Arqueológico Nacional. All of these museums had many artifacts and paintings that I will never have the opportunity to see again, so I soaked up every visit. During our visit to El Museo Arqueológico Nacional, the upcoming king (his coronation was scheduled for the very next week!) came to the museum with his wife to inaugurate an exhibit in the museum! So yes, I stood about 10 feet away from him and took a million pictures of him.

Another cultural experience that I attended was a bull fight. These bull fights happen all during the summer in Spain, so it was easy to get a relatively cheap ticket (only 9 euros). I have mixed emotions about these bull fights because while I thought that the symbolism and cultural aspect of it all was very intriguing, it was quite brutal to watch SIX bulls fight for their lives. 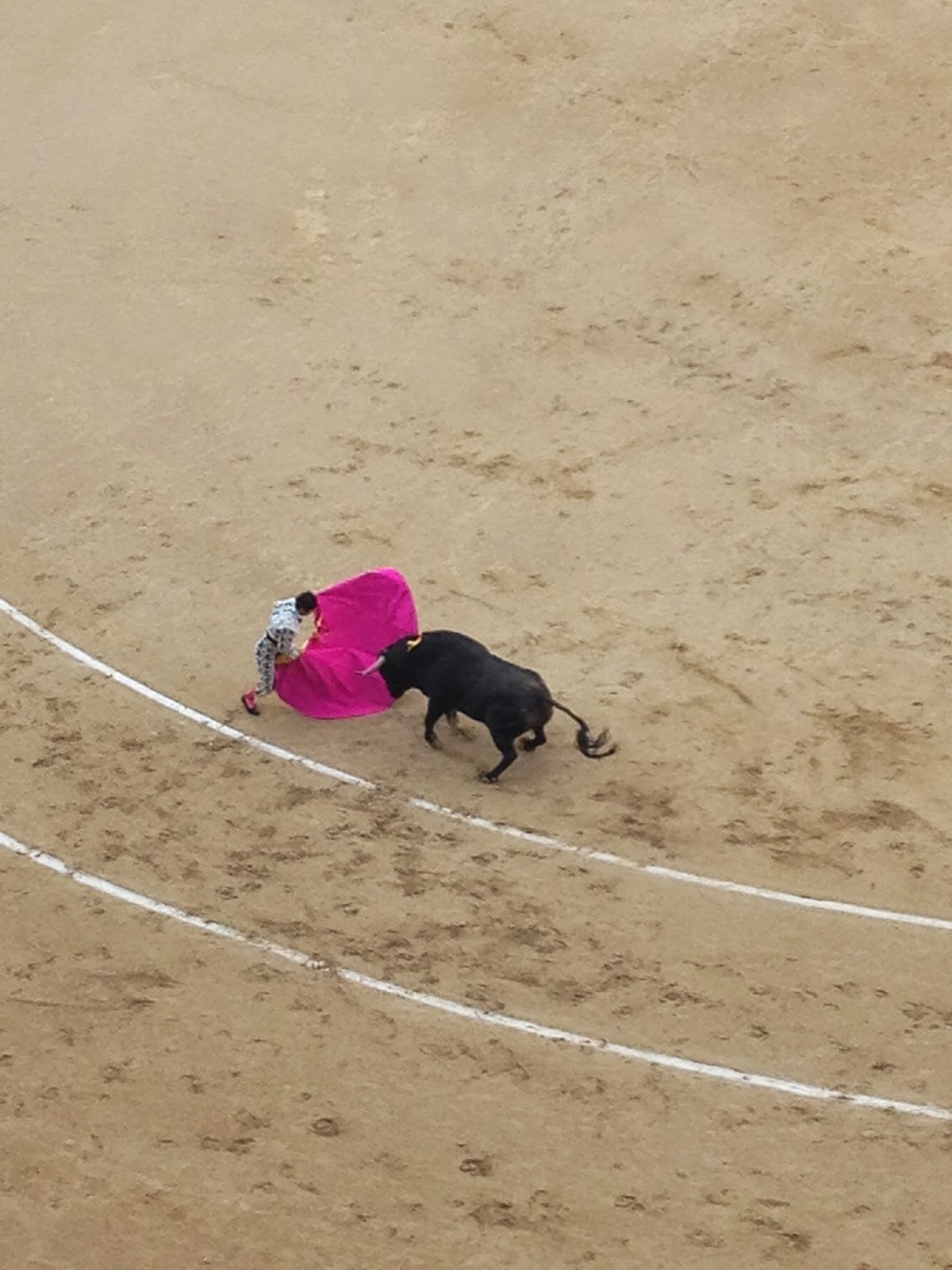 One of my favorite cultural activities that I did was go to El Rastro, Madrid’s flea market. It was only open on Sunday mornings, and we only had two Sundays in Madrid, so I took full advantage of both of those mornings. They sold everything from scarves and tapestries to jewelry and purses. Everything was relatively cheap there, and it was only one Metro stop away from where I was living. There were so. many. people. 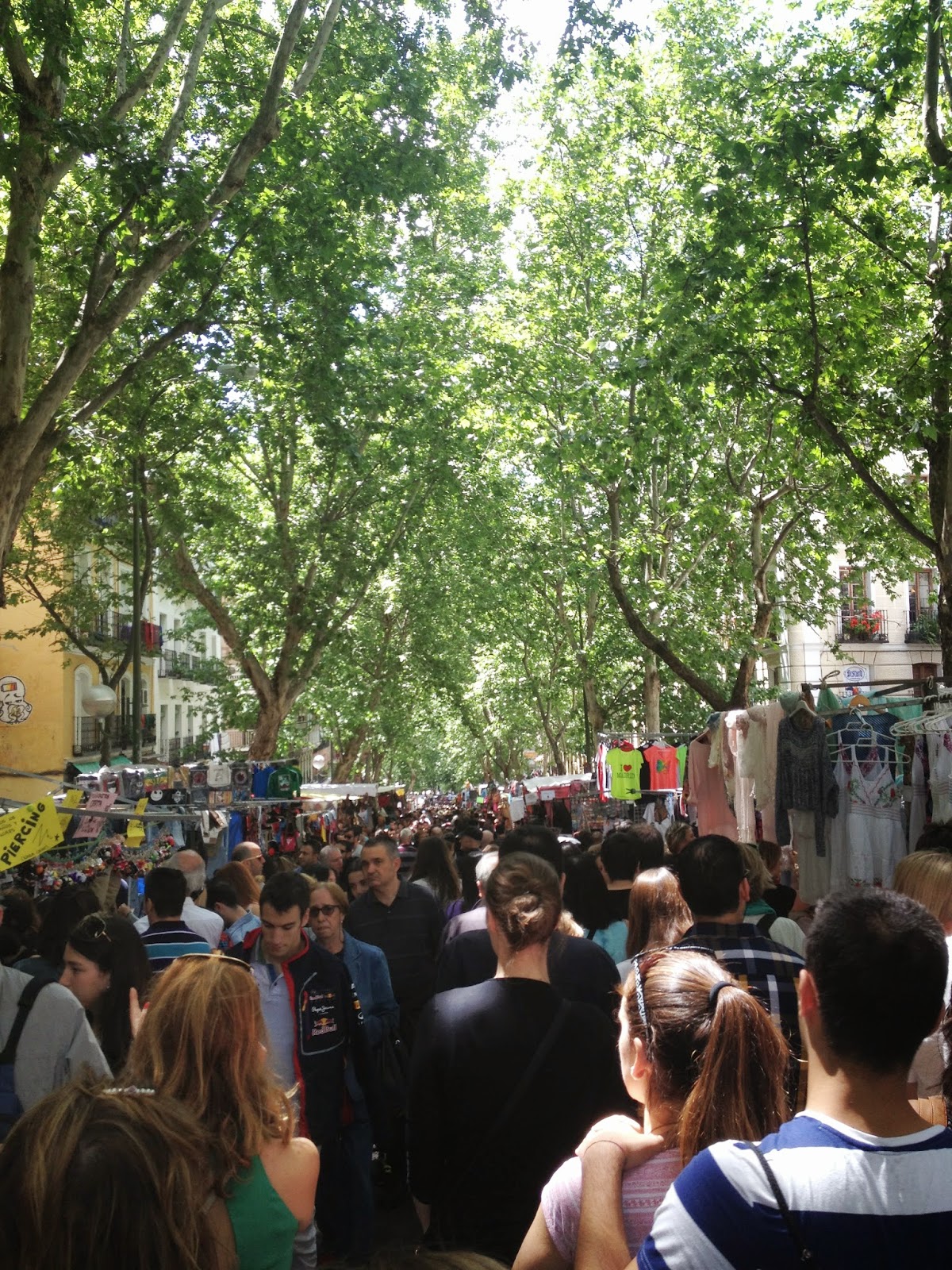 In addition to all of the wonderful experiences that I had in Madrid, I was able to visit five other cities in Spain. The first weekend that we were in Spain we went to Segovia. We saw these amazing aqueducts! 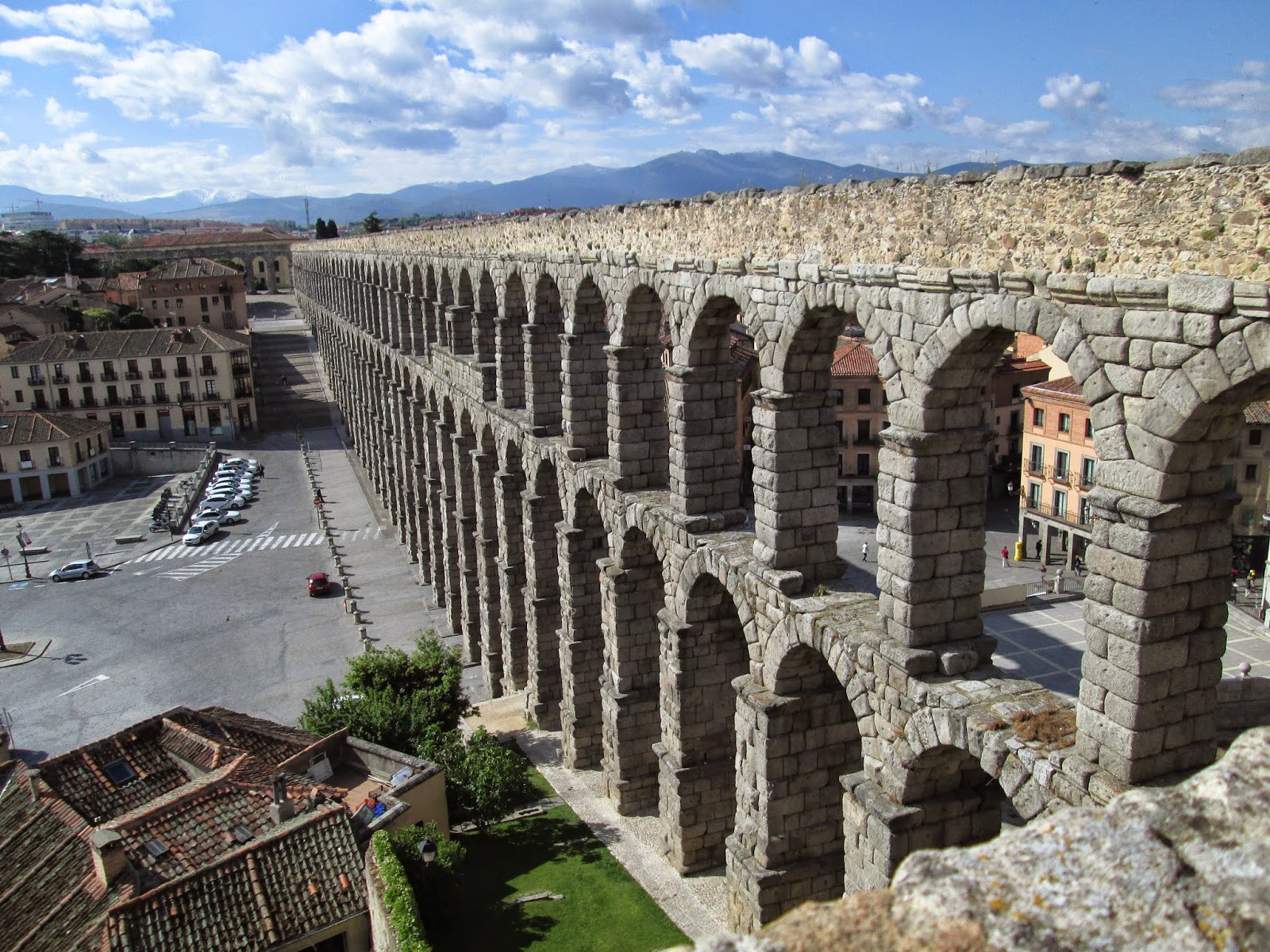 We also got to explore an old castle, and of course climb to the top of the tower (with an incredible view) through the very small winding staircase!


The second weekend, we travelled to Andalucía and visited the cities of Mérida, Sevilla, and Granada. In Mérida, we saw these ancient ruins of a coliseum... 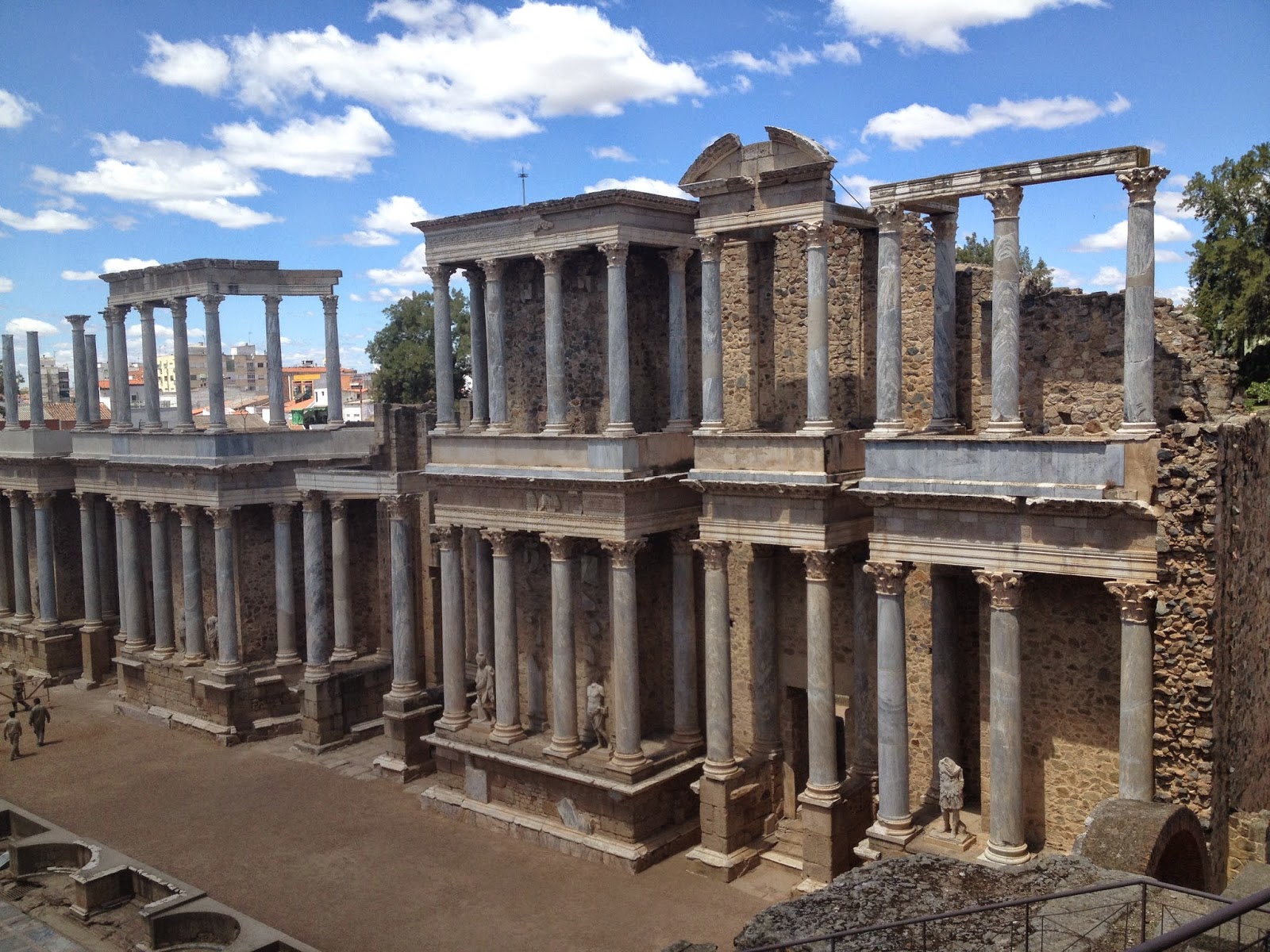 ...and got to explore the city on our own for a few hours. A group of us ended up taking a trolley around the city where we were able to see other artifacts in the city and hear about the cultural history of the city through an audio guide. In Sevilla, we happened to arrive on the day of the Spain vs. Bolivia soccer game… and we got tickets to go!!! We walked the streets of Sevilla for probably close to 45 minutes just trying to get to the stadium, and I have never seen so many people all trying to get into one place! There was a lot of shouting and shoving, but once we got inside, it was such a blast! We had great seats, and we all bought Spanish flags that we wore as capes during the game. We even got to participate in a stadium-wide wave attempt… and it worked!

We also stayed in a really cool hotel in Sevilla that had a rooftop pool with an incredible view! 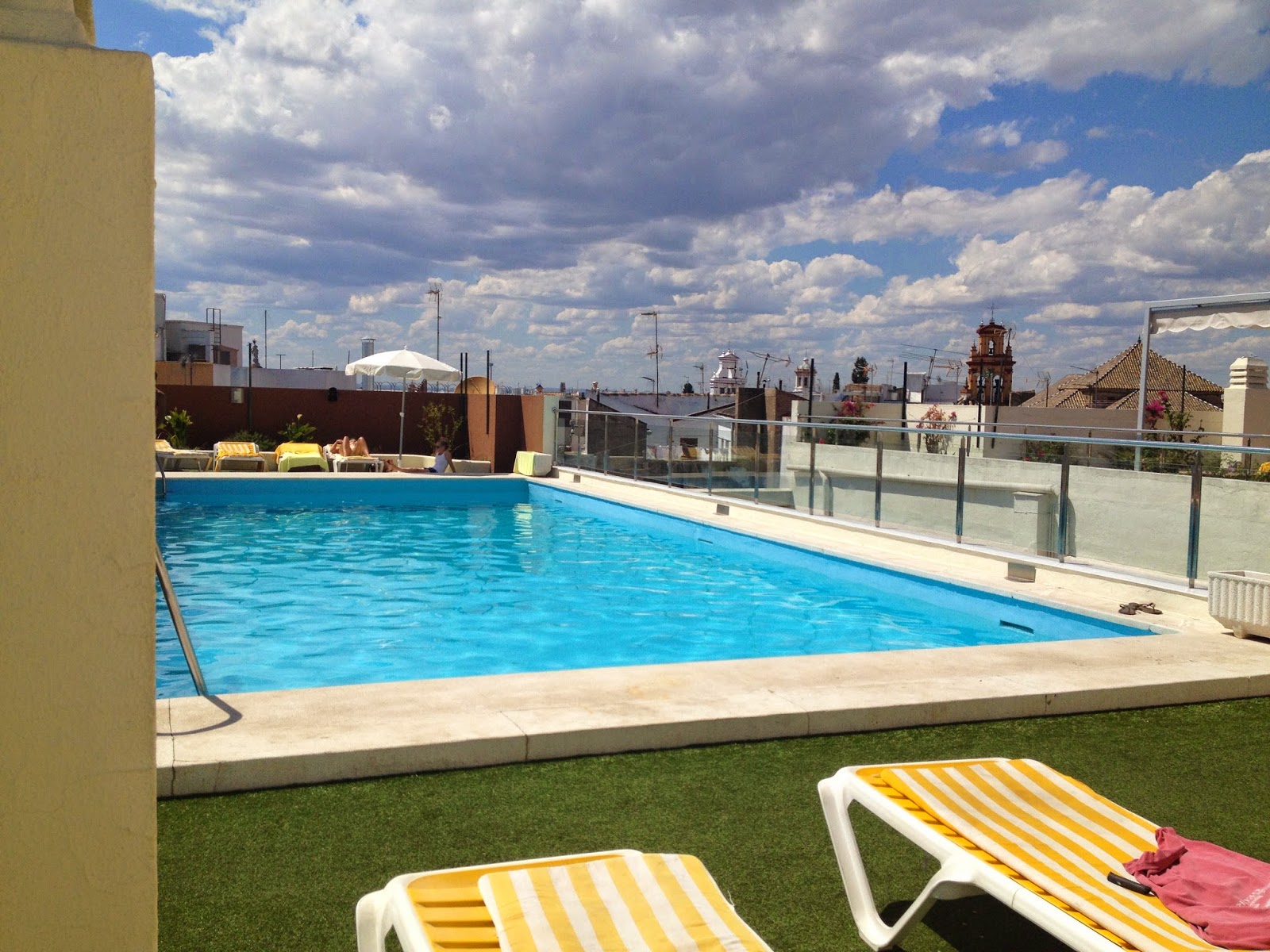 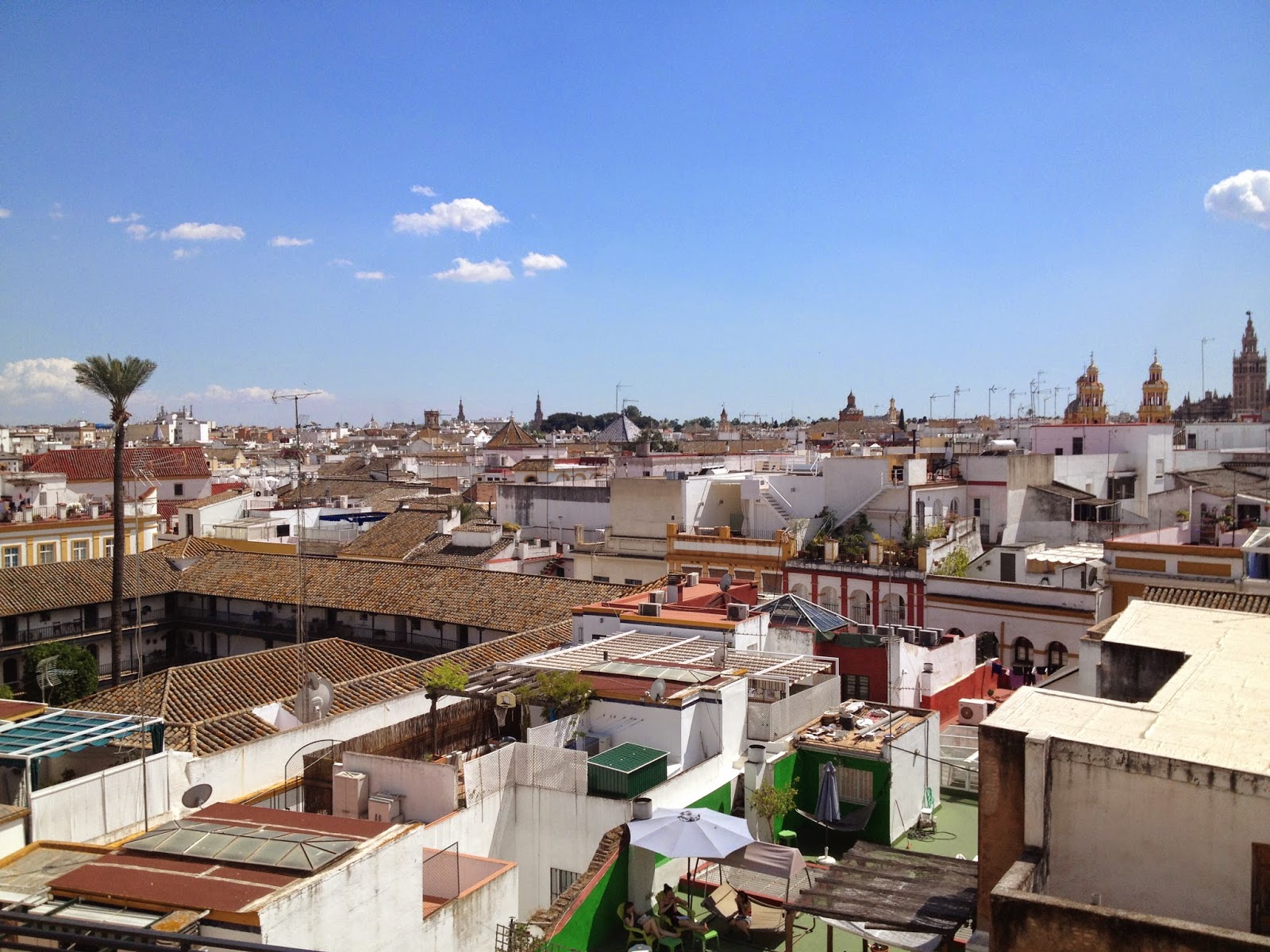 Our last stop in Andalucia was Granada. This was one of my favorite cities because we got to go to a live flamenco show and see La Alhambra! The flamenco show was incredible, and we had phenomenal seats! The dancers were very intense and engaged in their performances. It was really beautiful. 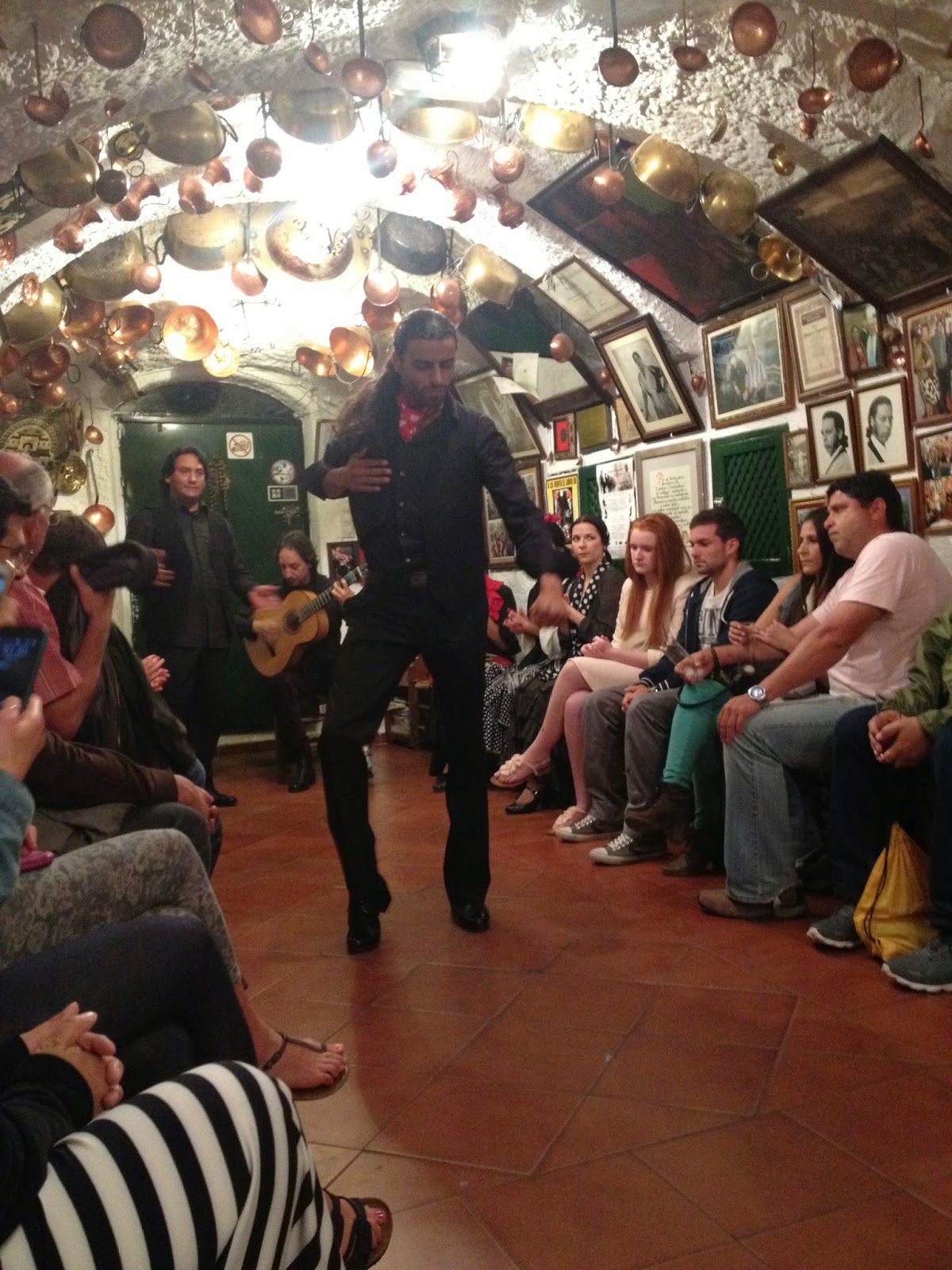 La Alhambra is a palace that is one of the most magnificent Arab works of art in the world. The gardens of Generalife are also enclosed in the palace.
Our final weekend of planned trips was a trip to the beautiful city of Toledo. Here, we visited a cathedral and did some shopping. The shopping in Toledo was very similar to the shopping in Madrid, but that didn’t stop me from buying way too many things (like I did the entire trip. But when am I going to get back to Spain?? Who knows!). I got the most amazing pictures from this city! We drove around the perimeter of the city and were allowed to get off the bus to take some pictures. They were simply breathtaking…


The last weekend of the trip was a free weekend for us. We had Friday through Monday off from classes, so a group of us on the trip decided to go across the Sea of Gibraltar to visit Morocco, Africa! There is a company called Discover Excursions (look them up) that organizes trips, mainly for students studying abroad, to places in Spain and Africa. This trip was simply amazing. We got to explore the cities of Chefchaouen, Tangiers, and Assilah. One of my favorite parts of this trip was bargaining with the local vendors! I got some really amazing deals on some pretty beautiful pieces of art from these local artists. I had such a great time going back and forth with them on the prices! They love it, and think it’s a game! However, Assilah was the coolest place because… I got to RIDE A CAMEL!!! It was the coolest thing I’ve ever done!


As I wrap up this summary of my trip for you, I want to leave you with a few helpful tips to keep in mind if you ever venture your way into Spain.
1) “Llena” (pronounced: yeh-nuh): one of the most important words that you need to know. It means “full.” Your host mother WILL fill your plate with food, and she WILL expect you to eat it ALL. So, as long as you tell her you love it and that you are “llena,” then she will accept that you had to leave some of the mound of rice that was originally the size of your head.
2) Tinto de verano: you can only get this drink in Spain (which makes me want to cry), so you MUST try it. It is a mix of red wine and Fanta limón (Lemon-flavored Fanta… which we don’t have in the US!!!!!). As weird as that sounds, it is life-changing.
3) Ladrón: the Spanish word for thief. Please, please, please hold on to your things. At ALL times. Because someone WILL take them. I was stunned by how often my host family warned us about thieves, but when my friend’s phone got stolen the very first week of the trip, I took them seriously. BUT, don’t let this keep you from travelling abroad!!! I am proud to say that I made it back to America with everything that I left with. Just have a small bag with a zipper or solid closure that you can hold close to you and you will be good to go.
4) The exchange rate: US dollars to euros is a BRUTAL exchange rate. To give you an example, when I first arrived in Spain, I took out 140 euros from the ATM and $195 US dollars came out of my bank account!! So just keep that in mind as you are budgeting and planning for your travels abroad.
5) Don’t say “Excuse me” if you run into someone on the street: This phrase was the biggest waste of breath. I wouldn’t say that Spanish people are rude, but they just don’t worry about other people when they are walking somewhere. If you happen to bump someone, just keep walking. They will look at you funny if you say “Pardón!”
I hope that this blog post gave you a good taste of the wonderful experiences that I got to do while studying abroad. And yes, I did study for my classes. PLEASE study. You can have a full cultural experience while continuing to make good grades abroad. The faculty members on this trip were phenomenal, and they really do want you to get the most out of your experience. Coming from this homebody, if you are even simply considering study abroad, please, please do it! It will give you new perspectives, increase your knowledge, and change your life in more ways than you even imagined.
Leanna Donato
UNCG in Spain
Posted by Unknown at 8:16 AM No comments: