Tory and Little Richie in Bristol!


Hey Everybody,
I’m Tory, a senior Biochemistry major, and this is my dragon, Little Richie.

We have been living and working (doing chemistry research) in Bristol, England for six weeks now. We are very busy in the lab throughout the week, but get to explore on the weekends. In this post I am going to share my experiences of living in this vibrant city, traveling to some popular UK destinations on the weekends, and my opinion on what it’s really like to study abroad over here (aka, read this section if you are applying for this program in the future).

Bristol Life:
This is a fun little city. It reminds me of a blend of Charleston, SC (because it is on the water, has rainbow townhouses, and has plenty of upscale shopping) and Asheville, NC (because the “city center” or downtown area is full of quirky local shops and artists, graffiti is the norm here, the university sits on top of a very steep hill, there are festivals and markets happening all the time, and it overall just has a very laid back feel). I have enjoyed my time is Bristol. There isn’t too much culture shock here because they speak our language. I do still feel awkward every time I say “y’all” but I can’t/won’t stop saying it. Some things that make Bristol different from Greensboro include having two taps on the sinks- hot and cold water are not mixed, you get burning hot lava and cold. It makes no sense. Also their alcohol culture is different from ours. As you probably know, young people can drink at 18 years old. As you may not know, there are no open container laws, so it’s completely normal to see people drinking while walking down the sidewalk or sitting out by the harbour, and they also serve alcoholic beverages in the café in the university student union.
Anyways, my daily life here in Bristol revolves around my research.  Every weekday I am in the lab from 9:30 am until around 5-6 pm. I haven’t had any days off, although I was told that it would be ok to take a Friday or Monday if I wanted to travel while I was here. My time in lab is great though. It has been a really great experience for me. I have learned new techniques and been able to work with instruments that I never used in my last two years of undergraduate research at UNCG. The majority of my readers might not speak "science", so you can skip to the next paragraph, but if anyone is interested, I have been working on synthesizing a catalyst to complete a reaction using methanol and ethanol to make i-butanol. Isobutanol is important because it is a sustainable fuel source that has more energy than the ethanol that we currently blend into normal petroleum based fuels, so more i-butanol can be blended into and ultimately one day completely replace gasoline. Past researchers in my group found certain ruthenium complexes to work really well at catalysing the reaction; however, ruthenium is in limited supply and isn’t cost effective, so it can’t be used as a sustainable solution. So I am currently testing some similar complexes that I synthesized that use iron instead of ruthenium. So far the results do not look like I am going to change the world or win a Nobel Prize, but that’s science for you. You win some and you lose some.

Welcome back! One of the things that I love about Bristol is the focus on shopping local. There are various markets all over the city that are open every day of the week. I always have access to fresh local produce, cheese and jams, bread, baked goods, and delicious street food. Bristol is also really big on festivals. I enjoyed the Bristol Harbour Festival a couple weeks ago and am really looking forward to the International Balloon Fiesta this weekend. For more on the Harbour Festival, check out the “Weekend explorations” section.

Snapshot of my Weekend Explorations:
·         Stonehenge 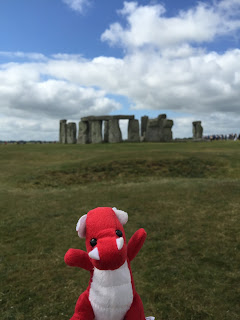 We took a tour bus to Stonehenge and was able to spend two hours observing the stones and learning about the history through audio guides and then exploring the exhibits, store and café. It was a great morning and an awesome experience! 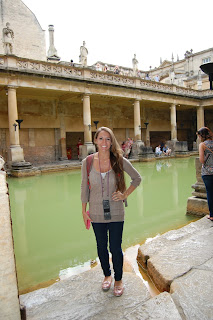 The highlight of Bath, UK is the ancient Roman Bath House that still partially remains. This tour was the most detailed and entertaining of all of the audio guided tours that I have been on. We spent hours exploring every nook and cranny of what used to be an ancient temple of the goddess Minerva. They even still had her bronze head from an ancient statue. It reminded me of home. 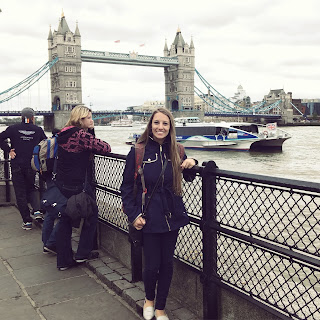 My weekend in London was exhausting. Me and three of my friends from the program took the earliest bus into the city on Saturday morning and then walked over 16 miles our first day and 12 on the second. In two days we saw everything from Buckingham Palace, Westminster Abbey, Big Ben, The London Eye, The Tower of London, The Tower Bridge, The London Bridge, The Royal Society of Chemistry, Piccadilly Circus, The Science Museum, and tons and tons of tea! It was an awesome trip. 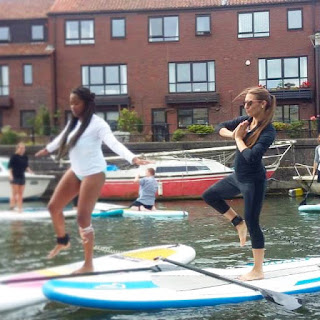 The Harbour Festival was great fun. The whole city was covered in markets and stages for music, dance and circus acts. I ate a lot of delicious street food during the three-day festival. I enjoyed a bison burger, jumbo prawns (aka shrimp), Spanish paella, a slice of cake, and the best baklava ever. Part of our group also planned a stand up paddle boarding session so that we could be on the harbour during the festival. This was so cool. We paddled past the S.S. Great Britain, “the Matthew” replica ship, steam boats, and many happy faces that enjoyed watching us paddle along. We even attempted a little yoga, as you can see from my picture. I might be more daring, if the water/weather wasn’t so cool! 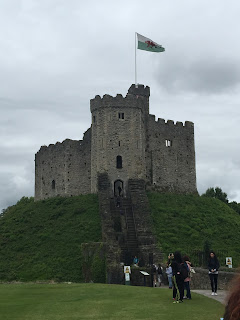 Check another country off of my list! The day trip to Cardiff was short and sweet. The Cardiff Castle was really cool to see since I’ve never seen a real castle before. We stood in the same room that The Queen hosted Obama and the rest of NATO in just last year. Once we finished up our guided tour that took us to a couple of private rooms, we went into the city centre for shopping. There is no shortage of shopping in Cardiff! There were also lots of delicious looking restaurants that tempted us from every cuisine. We went with Italian. You know what they say, “When in Wales!” 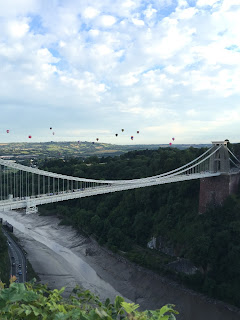 The Fiesta will be going on full force tomorrow, but I got a sneak peak of the balloon launch from the Clifton Suspension Bridge this evening while I picnicked. Over 100 balloons took flight, and it seemed like the whole city stood still to admire the beauty. Tomorrow I will be watching the balloons take off from their starting positions on the festival grounds, which I can’t wait for. It’s going to be gorgeous!

What they didn’t tell me about this program:

·         It’s cold. Don’t bother packing shorts. You’re not going to wear them on the weekends or even to sleep in. Pack jeans, leggings, and warm fall sweaters- like your big thick chunky comfy ones because most every day it’s rainy, gray and perfect pumpkin spice latte and soup out of a bread bowl weather, if you know what I mean. However, don’t expect those things. I haven’t seen either of those things.
·         Money is not in your favour. Don’t think about pounds as equal to dollars- they’re not. For every £10 you spend, $15.58 is actually coming out of your bank account. The currency conversion really adds up. Don’t expect to be able to live over here on a similar budget as back home. For one, you can’t save money by buying in bulk. That’s not a thing here. And for another majority of the stuff is just way more expensive than it is in the States- both on the price tag and due to the currency conversion.
·         Be prepared to walk. Bristol is a lively city full of very fit people because you see so many people walking and biking everywhere they need to go. My health app has gone crazy since being here. My daily average for this month is nearly 5 miles of walking/running distance per day. And on the weekends I normally rack up between 10-15 miles in a single day just by sight-seeing.
·         Student housing isn’t as luxurious here as it is in The States. I am currently staying in a flat that would cost me double the rent that I paid in Greensboro for a two bedroom, except now I live with six people. Cleanliness isn’t a priority when it comes to student housing over here. When we first moved in, our bedrooms and kitchen reeked. I bought some bleach and bleached my whole bathroom- shower, toilet, floors and sink- and kitchen- sink, countertops, and stovetop. When I bleached I realized that there was tons of black mold growing in the drains. It was disgusting, but it smells better and feels so much cleaner now that I have given my space a little TLC.
·         Lastly, I have found that I have personally been on the hunt for souvenirs for my family and friends the entire time. It’s not as easy as you would think. I want to bring back meaningful gifts (not shot glasses and magnets haha), so I have been to every market, all of the local shops, and even the big shopping centers. All I’m saying is, if you’re like me, you’ll always be thinking about your loved ones back home when you walk into a store, and you’ll probably be more likely to buy them a shirt, an airplane bottle of cider, or cigar than to get those things for yourself.